My brother made these over the weekend and they were amazing. The little addition of the honey at the end is a nice flavor twist.

Take 6 potatoes with skin on and cut into small cubes.
In a pan, use the drippings from 6 pieces of bacon along with a 1/4 stick of butter over a medium-high heat.
Cook the potatoes until they start to look crispy.
Season with salt, pepper and parsley.
Once the potatoes look pretty much done pour a little honey over the top and mix together well.
Serve 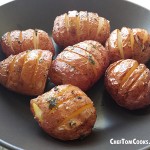 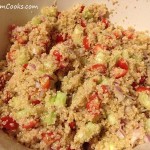