I had a very long weekend but at least it was enjoyable. Sunday though I was so tired. I couldn’t bother going to the grocery store, so I came up with this recipe using some ingredients I had handy at home. This was so tasty I had to share it with you all right away! Next time I might try adding some sweet Italian sausages too.

Combine the flour and garlic pepper in a bowl.

Dredge the chicken pieces in the flour and garlic pepper mixture.

Heat the olive oil in a deep skillet for about two minutes and then add the garlic.

After about 30 seconds, add the chicken and cook until done.

Add the 1¼ cup wine and use the liquid to deglaze the bottom of the pan from the chicken that was cooked.

Cook until mixture boils and until the peppers and zucchini are soft. 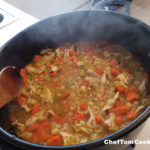 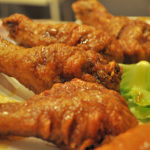 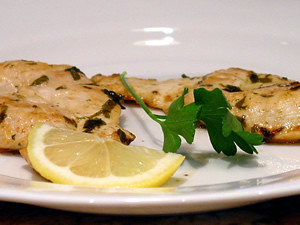 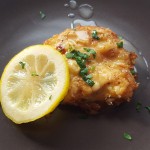 « Why Not Try An Organic Mojito?
Rigatoni with Braised Squash & Swiss Chard »